A Milpa do Salnés

A Milpa do Salnés Sociedade Cooperativa Galega was born in 2020 as a result of the VIII call of the Juana de Vega Foundation, aimed at support programs for agri-food companies. Our business idea was one of the 4 finalists in the program, culminating in the implementation and monitoring of the project. It is in 2021 that we created our associated work cooperative, with technical support from Espazocoop and the Juana de Vega Foundation.

The lines of work of our cooperative are based on ecological production, artisanal transformation, ecological training and research on issues related to ecological agriculture and the environment. It is important for us to be able to contribute positively to our social, economic and environmental environment and we focus many actions on the most vulnerable and disadvantaged groups.

Our star product is Milpa - nixtamalized corn flour that is the result of the mixture of Mesoamerican gastronomic culture and the agricultural tradition of Atlantic Galicia. We create a product aimed at Latin American consumers whose main cereal in their diet is corn, as well as Spanish consumers interested in new possibilities for their diet based on nixtamalized corn.

We are committed to a flour produced with care, dedication and in a natural way through agriculture on a human scale, which results in a healthy food, more nutritious and suitable for the consumption of people with special dietary needs, such as allergy sufferers or vegans. We are committed to helping our clients learn about the wide possibilities of corn to enrich their diet.

Do you have a store or restaurant and you want to incorporate our products?

Do you want to produce your sustainable and organic food?

Ofelia Gaitán Palacios, founding partner of A Milpa do Salnés Sociedade Cooperativa Galega, Nicaraguan and resident in Spain since 2017. She studied at the Central American University (UCA) a degree in Ecology and Natural Resources. He completed a master's degree in Rural Development at the National Agrarian University (UNA) as well as a specialization in Rural Tourism Development at the University of Commercial Sciences (UCC), as well as different postgraduate degrees in environmental and rural development issues.

He has participated in different congresses, courses and internships at the international level in countries such as Guatemala, Costa Rica, El Salvador, Chile and Spain. She has served as coordinator of sustainable development projects in vulnerable communities, as well as general manager in a Wildlife Reserve in Nicaragua, also as technical-administrative coordinator in scientific research projects, mainly with species of sea turtles and migratory birds and residents in Nicaragua. Since 2018 she has been a researcher in specific projects for SEO / BirdLife in Galicia with a species vulnerable to Píllara das dunas in the area of the Comarca do Barbanza (A Coruña) and a collaborator in environmental awareness activities, management of social networks and research for the SEO/ BirdLife and Local Group Pontevedra. 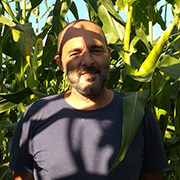 Guillermo Rodríguez Barreiro, founding partner of A Milpa do Salnés Sociedade Cooperativa Galega, Spanish, studied agronomic engineering at the National Agrarian University in Nicaragua, as well as agricultural engineering at the University of Vigo, has completed different postgraduate courses, in addition to different courses, workshops and seminars in different Latin American and European countries, which strengthen their experience in environmental and agricultural issues in temperate and tropical zones.

Our mission is training and research in organic agriculture and environment issues, added to the artisanal production and transformation of nixtamalized organic corn flour of local origin, to satisfy the demand of a part of the Latin American resident population in Spain and Europe and of consumers. with special diets (Veggies and allergy sufferers).

Our vision is that within 3 years we want to be the benchmark at the national level, in training and research issues on organic farming and the environment, as well as the production and transformation of nixtamalized organic corn flour of local origin for the Latin American public and consumers of special diets (Veggies and allergies), in the artisan production of nixtamalized flour, according to the Mesoamerican tradition, of organic and locally produced corn.